The Benefits of a Hob Cover in the UK

Hob covers in the UK are necessary for any Brit who owns a stove top, whether it’s electric or gas powered. The hob cooker rings should never be constantly exposed to the open air when you’re not using them. And if you’re using another hob next to an open hob, then you need to cover that open hob for sure. Whenever you have an exposed hob like this, it is vulnerable to getting dirty or messy. If food particles or sauces were to splash into the open hob, then you’ll have to spend time and energy cleaning it out. This can be really annoying to do.

Therefore, you should buy a hob cover in the UK. They can keep your hobs clean and prevent unwanted elements from getting into them. But cleanliness is not the only thing that hob covers are good for. They’re also good for hiding your hobs and deterring people from using the cooker. For instance, if you have kids in your house or flat and you’re worried about them using the cooker, you can put covers over the hobs to signal that they shouldn’t use the cooker. Sometimes if they don’t see the hobs, they won’t feel compelled to cook on them.

Don’t worry about accidentally turning on your cooker and heating up the hob that has a cover over it. Even though you should always try not to do this, it won’t cause a fire if it happens. The stainless-steel material of the covers is resistant to hot temperatures. Besides, you’ll notice smoke seeping out from the sides of the covers if this does happen. Once you see this, don’t attempt to take off the covers just yet. Immediately turn off the cooker and give it about 10 minutes to cool down. Then remove the covers and try turning on the cooker again. 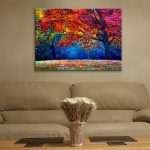